Every single person in Care2Run’s ecosystem is essential, and we’ve grown so much in three years thanks to all the different individuals who’ve played a part in getting us to where we are.

It is for this reason that we aim to hand this section over to our people – our participants, coaches, volunteers, parents, friends and loved ones – so they can tell you what Care2Run means to them.

This week we say hello to ….. volunteer mentor Rubiana Choong, a senior lecturer, who’s seen her son Joshua thrive in his role as a Care2Run Junior Coach.

FOR Rubiana, a senior lecturer at a local private college, Care2Run presents her eldest son Joshua with a platform to explore and realise his potential.

Seventeen-year-old Joshua is currently thriving as a junior coach, mentoring and guiding other differently-abled young persons, and Ruby says that the confidence and maturity Joshua now displays attest to how much he’s grown since joining Care2Run.

And there’s one other thing, she adds, that has helped Joshua grow into his new role as junior coach: empathy.

“Joshua is naturally empathetic to people. He remembers how he was treated when he was young and how he was bullied, and he is very mindful of that,” Ruby says.

Ruby and Joshua have been an important part of Care2Run since they joined at the beginning of this year, and here she is to share with us what Care2Run has meant to both of them.

Hello, Ruby. You and Joshua joined Care2Run a couple of months before this year’s Junior Leaders Programme kicked off. Could you tell us how you got to know about the programme?
Hi! I actually found out about Care2Run when a friend and I contacted Prem about arranging an outdoor session for children during the school holidays. Another friend had told us about Prem and that he organised activities for young people. That’s why we got in touch with him. The session eventually didn’t happen due to problems with planning and timing. However, Prem did speak to me later about enrolling Joshua in the Care2Run Junior Leaders Programme.

Was Joshua excited to take part?
He didn’t know about it. I told him only after I signed up [laughs]. But he loves socialising with people, so he wasn’t against the idea.

You mentored another junior coach, Albert, during the programme? What was that experience like?
It was great working with Albert. He follows instructions well and is quick to process what needs to be done. But most of all, he has this willingness to learn, which is really great. Albert was already very independent, but the challenge was trying to get him to mentor others and understand that not everyone is as quick as him. 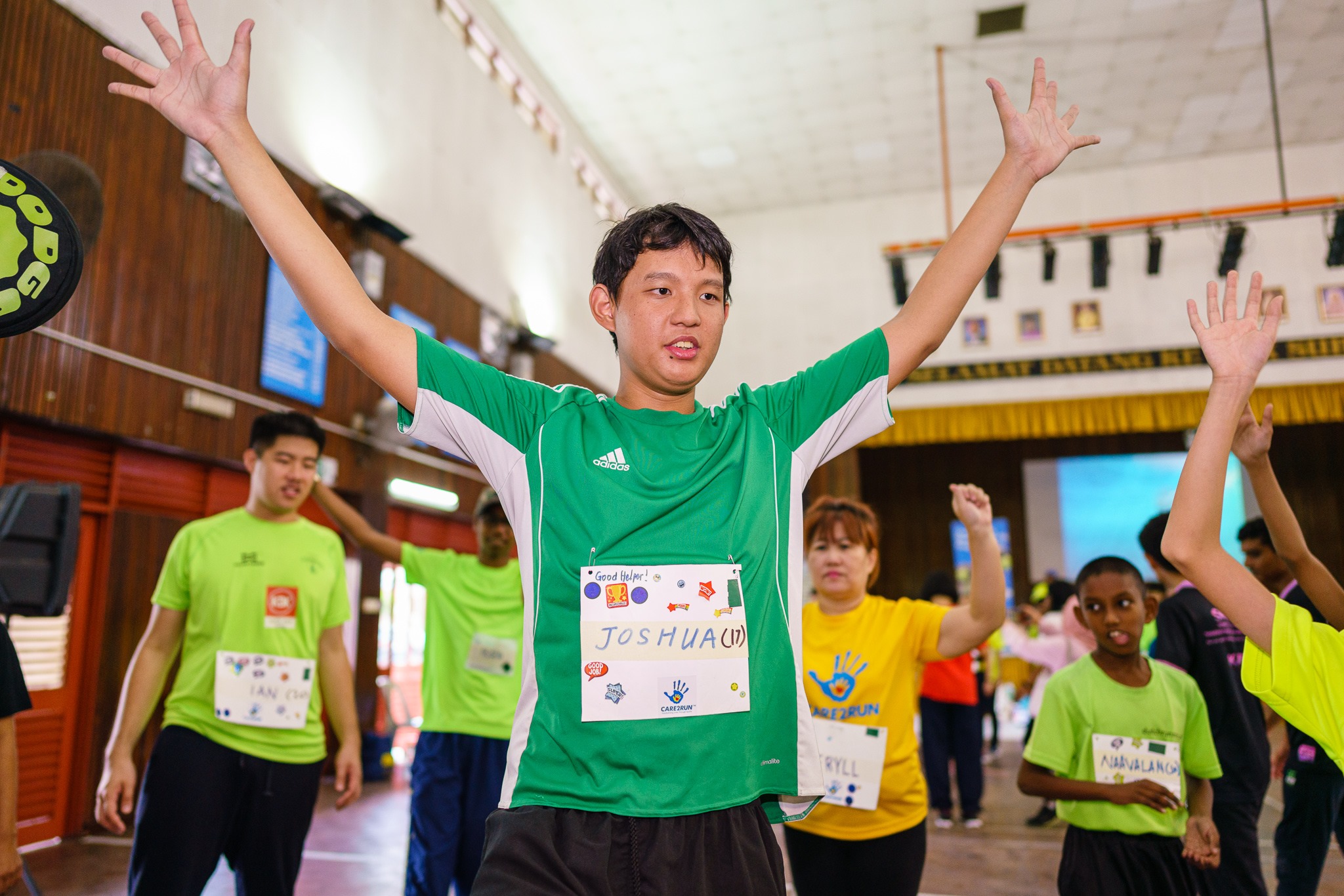 How would you say Joshua has grown since graduating from the Junior Leaders Programme?
Joshua definitely puts more thought into what he says and does. And he’s also grown in terms of decision making and independence. He’s become more assertive and wants to be consulted on decisions affecting him. He’s a people person. He loves being around people and engaging with them. And you can see that at Care2Run, he has made many friends and feels a sense of belonging.

Was it always easy for Joshua to make friends?
In the beginning, when he was young, no. When he was very small, he didn’t know how to play with his peers. He’d push other children, not realising that they’d be hurt. To him, it was fun. Later, after occupational therapy and working on sensory integration, Joshua started improving. But in school, in Standard 1, he experienced more problems. Joshua was not able to adapt in his class as there was a slight language barrier due to him not being fluent in the Malay language. As such, he didn’t have many friends and most of the time, he ended up being bullied. His school bag would be thrown out of the classroom, there’d be missing textbooks, his stationery would be taken … those sort of things.

Was it also a challenging time for Joshua academically?
It was. I had spoken to the teacher that perhaps Joshua could be seated in front of the class as I was concerned that he might daydream if he sat at the back. However, the teacher only accommodated my request for a day. After that, Joshua was at back of the classroom due to his height. This did not help him as he had difficulty in focusing and copying stuff down from the whiteboard. I made rubber stamps with characters like Bob the Builder and Thomas the Tank Engine and passed them to the teacher and asked her if she could stamp pictures in Joshua’s books as a reward for finishing his work and completing tasks. In the end, the stamps were used for all the other children, but not for Joshua. After eight months in the school, I had no choice but to take him out. We moved from that school to a homeschool centre, and that’s when things started getting better for Joshua. It was hard for us to find the right homeschool in the beginning. We went to many centres, and there were only a few that would take him in. Thanks to the right programmes and sessions, however, Joshua has improved and achieved many milestones. He’s also won awards at school and regional student conventions. 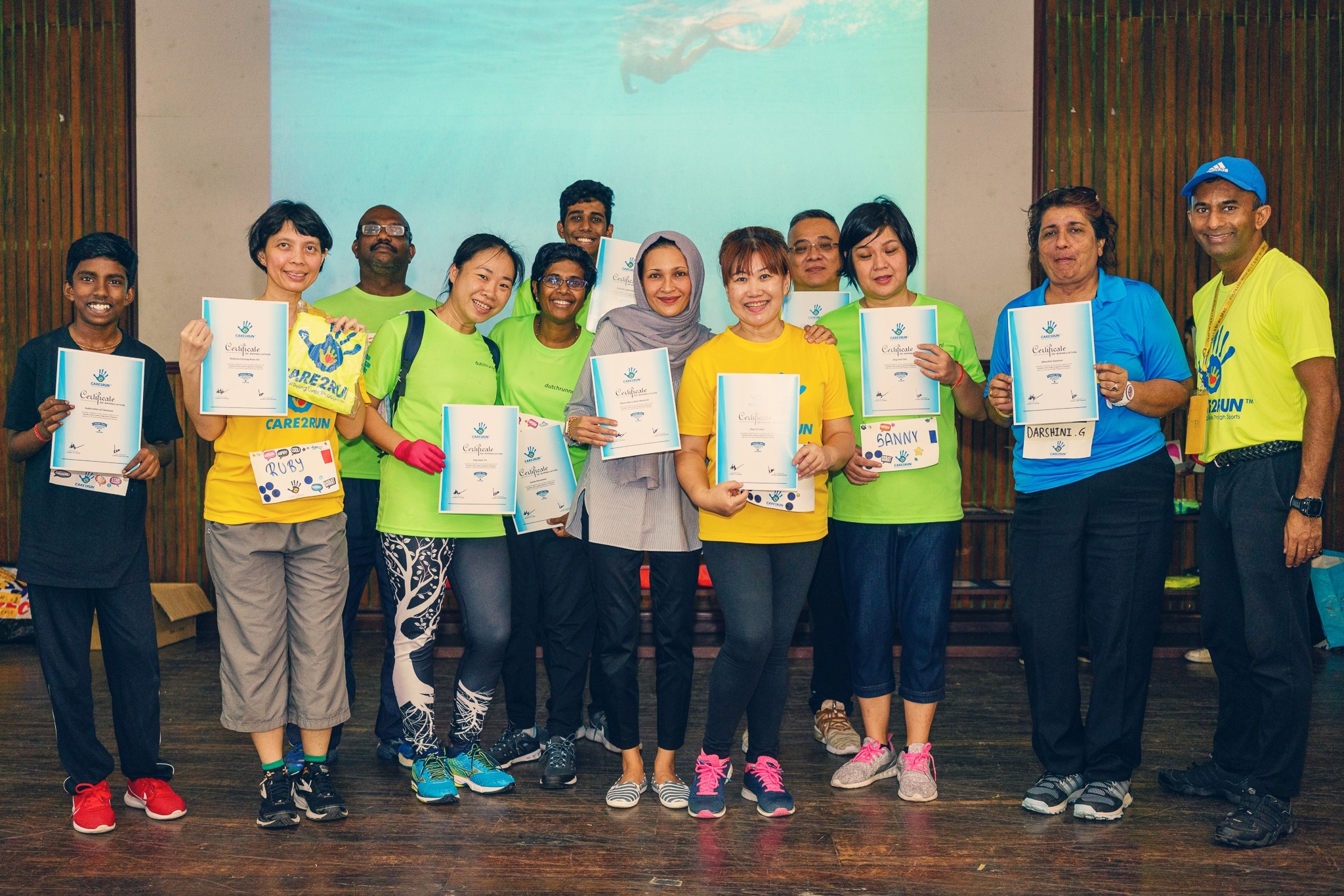 What does Care2Run mean to you and Joshua?
Care2Run has provided Joshua with a platform to learn and grow. He has realised that there are kids who have bigger challenges than him. I’ve told him that everybody is different. I explained that everybody has their own shoes and you can’t measure your shoes with others’. So, try and socialise with everyone. That has helped. As a parent of a kid with differences, you always hope that differently-abled children have other avenues which will ensure better futures for them on top of working in bakeries and hotels. That’s what Care2Run offers.

What are your aspirations for Care2Run?
Care2Run has enlightened and made a difference to many differently-abled children. Sometimes, some children come for trial sessions and, for whatever reason, it doesn’t work out and they don’t join. But for those who do, you can see the impact it has. Perhaps Care2Run could organise different types of programmes – like a day out in the jungle or a camping event – so that everyone can benefit on some level.